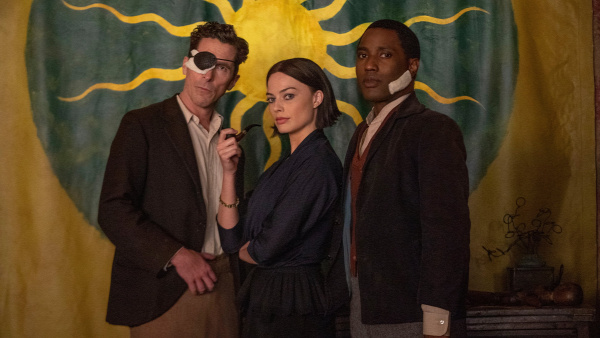 A one-eyed doctor (Christian Bale), a young black man (John David Washington) and an eccentric nurse/artist (Margot Robbie) meet in a French hospital during World War I... What sounds like the beginning of a joke is the crux of the and pivot of the new coup by director, writer and producer David O. Russell, known for films like "Silver Linings" or "American Hustle".

Bizarre, surprising and absurd
Because "Amsterdam" tells the story of the trio's unusual friendship, which finally brings them from Europe to New York, where the mysterious death of an old acquaintance triggers a whole series of unfortunate chains that could change the course of the story. So much can be revealed, in addition to the magnificent three also play a role in ornithologists without any morals, an old general with a penchant for bouillabaisse and a mysterious Club of 5, whose logo looks suspiciously like a swastika.

In case it wasn't clear from this short description: "Amsterdam" is probably one of the wildest trips that cinema has produced in a long time. The film is bizarre, surprising and sometimes just so absurd that you just wonder what the hell just happened. But it's so entertaining that you don't really care - because the fact is, "Amsterdam" is a lot of fun.

This is mainly due to the fact that, despite all the absurdity, the film manages not to slip into the banal and you have to hold the protagonists in your heart despite or perhaps because of their peculiarities. Small details, unexpectedly emotional moments and, above all, the great enthusiasm of the ensemble cast, which consists of so many stars that one regularly wonders: "What, he or she is also playing here?", show how much passion there is Film is stuck - and this is also transferred to the viewer.

Not perfect - but definitely worth a visit to the cinema
Of course, "Amsterdam" isn't without flaws either, which film is that? But let's just do it like the three protagonists in the Dutch capital, let it be five and have a nice evening at the cinema.