Two years after winning the Oscar for Quentin Tarantino's Once Upon a Time in... Hollywood, Brad Pitt returns with a bang in 2022 with a non-stop of projects. We will see the first of them on April 13, when he joins Sandra Bullock and Channing Tatum in the comedy The Lost City, which aims to be one of the craziest titles of the year.

Although not the most, because among his next films is also Bullet Train, an action thriller with comic overtones that has just released its first trailer and aims to be one of the most explosive releases of the year.

Bullet Train is the adaptation of the novel of the same title by Kotaro Isaka. It is a dark and satirical thriller about five contract killers with the same objective who cross paths on a bullet train, but their opposing interests will make them fall into a parody spiral of violence and confrontation. Beyond Brad Pitt, who returns to exploit all his charisma on screen in this preview, we can also find other prominent names in the cast such as Joey King, Aaron Taylor-Johnson, Michael Shanon, Logan Lerman or Sandra Bullock, who this year coincides with the actor from The fight club in up to two projects. In addition, it also has the participation of the singer Bad Bunny, whom we can see confront Pitt in the trailer.

If there is a movie that this first trailer for Bullet Train refers to, it is without a doubt John Wick, the action thriller that Keanu Reeves starred in in 2014 about a hitman seeking revenge. That film, which also alluded to Asian culture with aesthetic elements or martial arts fights, not only relaunched the Matrix actor to stardom, but also became an instant box office hit with $86 million worldwide and gave rise to another iconic saga in Hollywood. 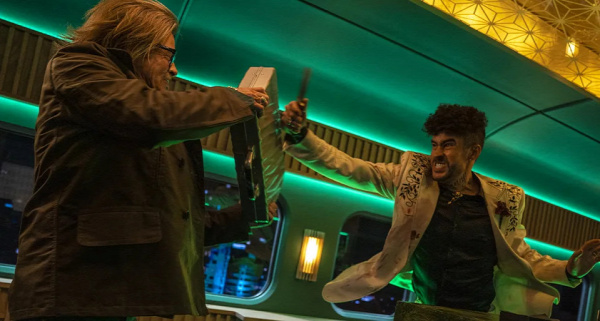 In fact, David Leitch, one of those responsible for John Wick, is the director of Bullet Train. The filmmaker is also behind other great action-comedy hits such as Deadpool 2, adrenaline-pumping proposals like Fast & Furious: Hobbs & Shaw or that female version of John Wick that was Atomic with Charlize Theron. So we would have to expect a job to match.

Of course, Brad Pitt does not need Bullet Train to catapult him anywhere, but given John Wick's data and the good acceptance he had among the public, it is obvious to think that this new action proposal can repeat play and ring the bell in ticket office. Its premiere is scheduled for July 22, an ideal summer date to go to theaters to cool off with this succession of frenetic action, shootouts, battles, explosions and chases in the midst of an aesthetic context as captivating as Tokyo. And let's not forget his humor either, which aims to reach a perfect black and hilarious tone to finish conquering us.

Here we also see Bryan Tyree Henry, Aaron Taylor-Johnson and rapper Bad Bunny as a bunch of assassins who all seem to have been given the same task - to steal a valuable bag. The film also stars Michael Shannon, Zazie Beetz and Sandra Bullock.

Since his work on the first "John Wick" movie, Leitch has given us "Atomic Blonde", "Deadpool 2" and "Hobbs & Shaw", three movies that stand out for crazy action scenes, hard fighters and a lot of humor. The same recipe is used in "Bullet Train" which also takes place in a limited environment - on a modern high-speed train that rushes through Japan.

Brad Pitt unleashes his star arsenal with a view to blowing up the box office
Trailer premiere for "Bullet Train" - this summer's wildest action roll?