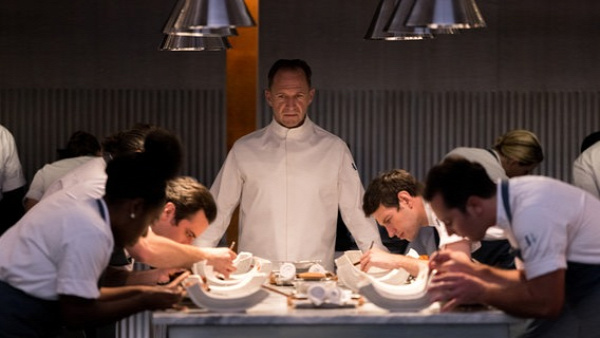 Margot: Does everyone fit on it?
Tylor: Easy, there are twelve guests.
Margot: How are they going to make a profit?
Tylor: At 1,250 a head.
Margot: Are we eating a Rolex?

The star chef Julian Slowik invited, a vain, elegant perfectionist, played by Ralph Fiennes, who runs the kitchen with military drill, monitors the entire property like the leader of a sect and is admired by his employees.

Guests -- alongside self-proclaimed foodie Tylor and his companion Margot, played by Nicholas Hoult and Anya Taylor-Joy -- include an elderly millionaire couple, a food critic, a publisher, a once-famous actor and a group of businessmen. All handpicked by Slowik himself.

"The Menu": Reckoning with the cult of good food
"The Menu" is an experimental arrangement, follows the strict order of the menu, perfidiously planned by the star chef, who at some point is mad in his eyes. It's a reckoning with the cult of good food, no matter what the price, with the ever-increasing expectations of well-heeled guests to be entertained. They are entertained, just differently than expected.

Director Mark Loys, previously specialized in series such as "Succession" or "Game of Thrones", presents a multi-layered horror satire with deep black humor, staged as an intimate play. With a few exceptions, almost everything takes place in the restaurant room with an open kitchen. The team presents course after course as if on a stage.

Anya Taylor-Joy exudes joy
Slowik's opponent is Margot, invited by Tylor at short notice and a foreign body in this scenario - a great joy for Anya Taylor-Joy as an actor, which you can tell from her. "Margo herself is a mystery," says Anya Taylor-Joy in an interview. "Both for the audience and for those present in the restaurant. She performs herself. She plays with the others. I found that very interesting. At the beginning, everyone in this room has a role, but as the evening progresses, they show more her true colors. I found it exciting to create a life of her own for Margo. When she shows her true colors you can see her sincerity and it is easy to distinguish between her role and her real self."

The guests become extras in their own funeral feast. Almost performatively, "The Menu" negotiates the relationship between food as art, stages it as a vital relationship of dependency and declares it to be an empty consumer shell. It is a film that is unpredictable from the first to the last minute and in the grand finale it overdoes it to such an extent that it is a cinematic feast for the palate.