First clip for "Avatar 2": Cinema fans have been waiting for this trailer for 13 years!

Spectacular images, animation out of this world and a dramatic story: The first trailer for the long-awaited sequel to "Avatar" makes up for more than a decade of waiting. The second part of James Cameron's spectacle, "The Way of Water", includes the underwater world.

The whole (cinema) world has been waiting for this trailer: After many postponements and a total of 13 years of waiting, sci-fi fans can finally look forward to the first moving image from the "Avatar" sequel "The Way of Water".

A one and a half minute clip takes viewers into the colorful world of the blue Na'vi, which director James Cameron launched in his visionary 3D cinema hit "Avatar" in 2009. With unique animations, visually stunning richness of color and plenty of drama - also under water - the teaser increases the anticipation of the cinema highlight, which is scheduled to debut in cinemas in December.

The long-awaited sequel takes place ten years after the events of "Avatar: Pandora's Adventures". The story revolves around the Na'vi couple Jake (Sam Worthington) and Neytiri (Zoe Saldana), who have since started a family with several children. But the family idyll is also threatened by external dangers in the second part of the sci-fi series. "One thing I know: wherever we go, this family is our fortress," assures Jake at the end of his soulmate trailer.

In 2009, James Cameron created one of the most successful films of all time with "Avatar" - which was largely due to the visuals. The film combined real actors and first-class computer animations into the first really big 3D spectacle in cinema history. The technology, which was groundbreaking at the time, has never been used more spectacularly. The reward for the effort: With 2.84 billion US dollars in revenue, the film is still enthroned at the top of the all-time charcoal rankings. There were three awards at the 2010 Oscars: Best Production Design, Best Cinematography and Best Visual Effects.

"Avatar 2 moved me to tears"

Zoe Saldaña has seen 20 minutes of James Cameron's long-awaited sci-fi sequel. "I became speechless," says the star.
We've been waiting thirteen years for a sequel to "Avatar" but believe it or not, this winter it's finally time to return to Pandora. 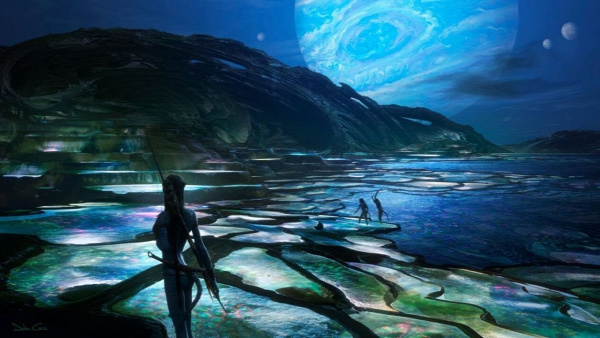 The first review, however, is already here - more or less. Actress Zoe Saldaña has seen 20 minutes of James Cameron's new sci-fi spectacle and she believes that we are not prepared for the emotional smock that awaits:

- I get ready to cry just as I talk about it, because I got to see 20 minutes from the finished film at the end of last year. And I became speechless. I was moved to tears, says Saldana in an interview.

First clip for "Avatar 2": Cinema fans have been waiting for this trailer for 13 years!
"Avatar 2 moved me to tears"