Terrifier 2, the horror that is shocking America soon in streaming

Damien Leone's Terrifier 2 is rocking America. The horror film, which openly mentions 1980s slasher movies, grossed nearly $ 6 million and sparked a rumble on social networks that recalled happy cases from the past, from "The Blair Witch Project" to "Paranormal Activity".

Scenes of spectators who feel bad, between vomiting and fainting, for a film that abounds in spilled blood but also knows how to be terribly funny in its gore.

The film, also appreciated by Stephen King, will soon arrive in streaming. From October 30, the United States can see Terrifier 2 on Streambox, accessible only through an American Prime Video subscription, while in Italy it is not yet clear how it will be possible to witness what is a real independent phenomenon.

The first chapter of the film, also available with dubbing in Italian, is not present in any catalog except in the illicit ones. Soon they may both be appearing on some specialized platform.

The success of Terrifier 2 is there for all to see and delivers the figure of Art the Clown to a horror icon like the villains of the past: Freddy Krueger, Jason Vorhees, Michael Myers, Chucky and Leatherface. The violence in Terrifier 2 is by no means a boy's joke, but it is also true that as the evil clown kills, he always does it in a more surreal and deliberately comical way. This effect manages to balance the violence, which still follows the rules of the genre.

Among the things never seen before in a slasher movie, the opening scene, the one in which Art goes to a laundromat to clean the blood from his costume. In short, Terrifier 2 knows how to scare but also knows when to not take itself too seriously. Moments of lightening that serve to seriously terrify, when it is appropriate to do so. 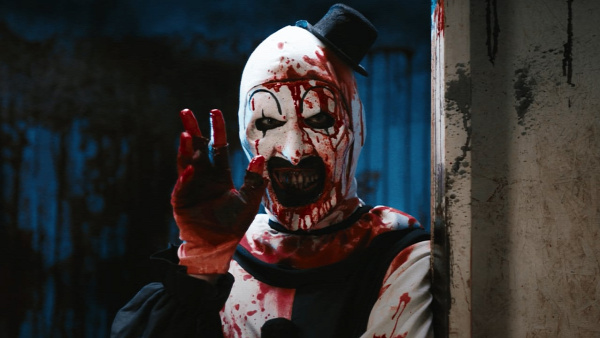