A Hollywood quirk prevents 'The Batman' from reaching perfection

After multiple delays due to the pandemic, The Batman, the new Gotham dark knight movie starring Robert Pattinson, has finally hit theaters. It portrays a new vision of the superhero under a police thriller approach, a film with a dark, intense and realistic tone that, through a detective investigation structure, introduces us to a plot of power corruption, influence peddling and crime with Enigma as the great villain of the show.

I think it is something never seen in the adaptations of the character to the big screen, being more of a thriller in the line of films like David Fincher's Seven or Zodiac than a superhero movie to use. Hence, I think it is one of the best and most interesting versions of Batman that we have had the opportunity to see. In addition, his flirtation with other genres such as horror, the great atmospheric work behind the direction of Matt Reeves, the gloomy photography of Greig Fraser, the intense melodies of Michael Giacchino or the power that Pattinson radiates behind his Bruce Wayne, the They are close to perfection.

But no. It's not perfect. The Batman makes a major mistake that responds to a whim that Hollywood has clung to in recent years and to which I see less and less sense: its duration of 176 minutes. 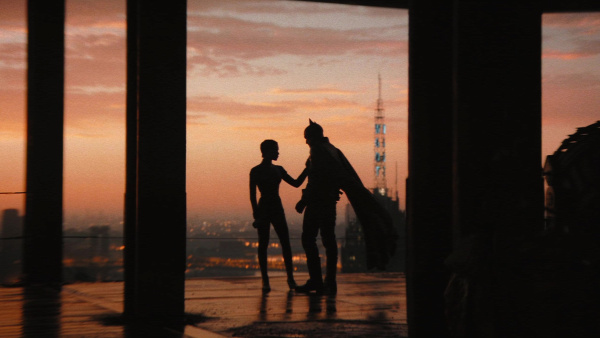 There are almost three hours of footage available in this new Batman movie, which breaks the record for being the longest film adaptation of the solo character after surpassing the 164 minutes of The Dark Horse: The Legend Rises. It could be justifiable in the event that the story had a lot to tell, many edges to stop at or action sequences that deserve to be lengthened to increase the degree of spectacularity. But is not the case.

The story proposed by The Batman is simple. It is a detective story of crime and corruption where the bat man tries to stop Enigma and the macabre games of him, who in his attempt to take justice on his own account is creating chaos in Gotham City. It is an argument that could perfectly have been told in an hour and a half, and stretched out to almost three hours, presents considerable rhythm problems that at times translate into boredom and saturation.

I have to admit that, although in general terms I loved The Batman, the first section of it was uphill for me. Its slow pace, the time it takes to put us in context and introduce the characters, and the intensity of its atmosphere, made it very difficult for me to digest in its first half hour. I felt that the scenes were taking place in slow motion, that the film needed a lot more pizzazz, and that it was far from being the superhero show I was looking to see.

Fortunately, once the plot is introduced, the film comes into its own and all these problems disappear. It was then that I felt captivated by this new approach to the character, by its police thriller tone, by how great and insane Paul Dano's Enigma is, by the spectacular nature of its action sequences or by its fantastic fusion of a Gotham City realistic with the universe of comics.

But the feeling that I was watching an unnecessarily long movie returned in the second half of the footage, when from the middle stretch to the final climax I felt that little or nothing was happening on screen and that Warners should have seriously considered putting the scissors. However, it seems that nowadays every big budget blockbuster must respond to this elongated structure, even if it goes against what the film requires.

It is Hollywood's way of selling the viewer that they are going to see a great event, that the ticket price is going to be justified by these long hours of footage. A whim that seeks to boost the box office despite the fact that the productions may be harmed because the excess footage does not adapt to its structure. And I've been having this feeling for quite some time. Even with movies that I love and don't mind spending extra hours watching footage.

For example, last 2021 I left the cinema delighted and excited after seeing No time to die, the latest James Bond adventure. But thinking about it cold, the film has plenty of duration everywhere in its 163 minutes of footage. Without going too far, its prologue was excessive, almost half an hour of introduction with unnecessarily long dialogues and an action sequence that, as spectacular as it was, could have been told in much less time. And it could even have been much more intense and dynamic. I can understand these exaggerated lengths in movies like Marvel's Eternals, whose large number of characters, plot and context even required more than its 156 minutes to be properly explained, but not in the case of stories like The Batman.

There have always been films of extreme duration, and you only have to look at classic Hollywood where this effort to create a cinematographic event was even greater and the productions usually exceeded four hours. But you have to know when it is necessary and when not. And I think that, given what happens in The Batman, the industry should stop to criticize itself and assess whether it is really worth using these elongated structures as a commercial claim when they seriously hinder the films. And honestly, it made me quite angry that the great experience that The Batman is supposed to be affected by this, because it could perfectly have been a movie of 10.